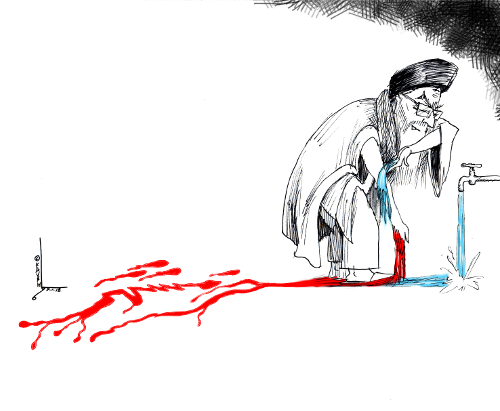 The Islamic Republic Regime is cracking down on citizens of the city of Khoramshahr in Iran.  So far there have been deaths and injuries for the citizens who have been demonstrating to have clean water. Year of mismanagement, corruption and empty promises have caused the citizens of this city with a history to lose their patience.

Incidentally this city was leveled to the ground by the Iraqi forces during the 8 year bloody war in the 1980’s where the name of the city was changed from Khorramshahr (green/blooming city) to Khooninshahr (Bloodied City) referring to the sheer number of Martyrs who gave their lives to free the city from the Iraqi hands marking a major turning point in the war and scoring a major propaganda point for the regime back in the 1980’s.

Today, it is ironic that the blood spilled is on the hands of those who use the city as their own pawn to legitimize their stronghold on power.  However, people do not seem to be quiet this time.

It is time for people to be heard.