A Lyft ride with Mohammad 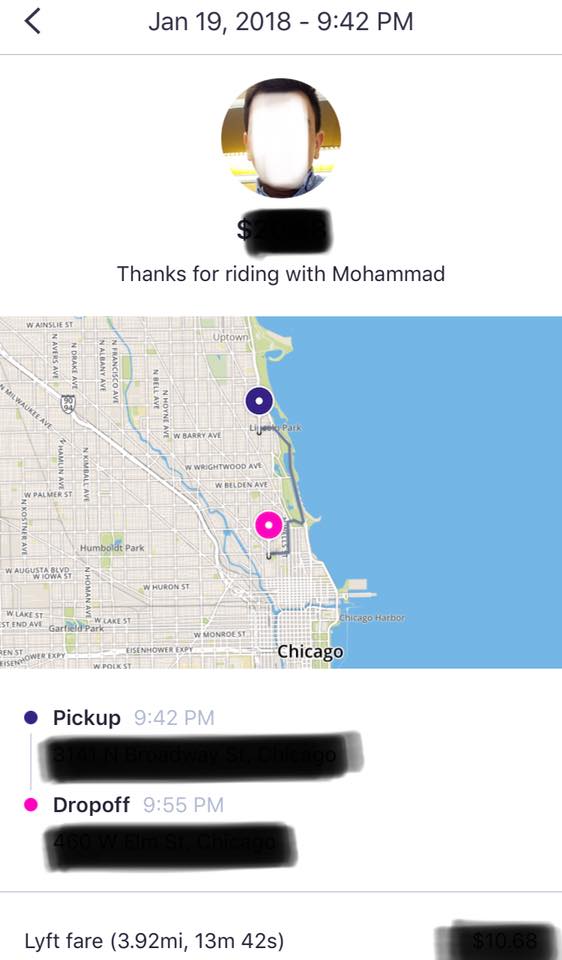 Sometimes a decision to give up one thing to gain others is a tough one.  Yesterday, I made such a decision about inactivating my Facebook personal profile by this Friday. I generally do not like to make a spectacle out of such things because I have never craved attention. Yet, I felt a story–that may have triggered this epiphany– was worth sharing with my friends, family and acquaintances.

…..This will be my last Facebook post on my personal account for a long while (inactivating on Friday) to concentrate on other things…. but I wanted to leave with thoughts and observations about life in the analog and digital world… so here goes nothing.

Last weekend I requested a Lyft while celebrating a dear friend’s birthday. While waiting I was immediately contacted by a driver but after several minutes he called me and asked  if I could wait two minutes since he had to drop off someone. I said yes.

I am courteous and a few minutes is nothing since Chicago weather was actually very nice to allow me to meditate. Less than ten seconds went by and I was contacted by Lyft, auto message,  saying that another driver will be coming. I was stuck in a momentary ethical dissonance, I had made a commitment to the first driver and now was it Lyft automatically sending another driver or did the first driver actually cancel? I did not have a moment to think and call the first driver since the second driver was already calling my name from across the street, “Kaveh?” He pronounced my name perfectly, the same way my wife, my mother or my close friends do.

Feeling bad about ditching the first driver I was intrigued about Mohammad, my new driver. I admit that I have several family members and friends who are named Mohammad so the name does not stir any preconceived notions or feelings as it may for others. But, this night I found myself feeling a knot in my belly…. Have I been sensitized to have an uneasy feeling to a name that should remind me of times spent with with my cousins in laughter and joy and engaging in conversations with good friends?

Perplexed, I opened the door to Mohammad’s car. I made small talk, “Aren’t we having a heat wave in Chicago or what?” Mid-thirties are a heat wave here in January. He laughed and said he is getting used to it. That was my cue to probe without probing. “Oh, is Chicago not your hometown?” He replies that he has been here for only four years. “So, then, where are you from?”

A brief pause, “Afghanistan” he says.

I smiled, thought to myself, “That’s why he said KAa-Ve, with a short stop on the Ve.” I asked him if he spoke Persian (Farsi) and he enthusiastically said YES!!! His English was spot on for only living in the U.S. for a few years. I found out that he is a civil engineer who received his degree back home and as a result of helping the Americans he was able to come here. He drives for Lyft just to make a little money to pay for his tuition at IIT (a technical college in Chicago) to further his education and send money back to his family there.

He compliments me on my Farsi after he finds out that I have been here for more than 30 years…. I share with him my sympathies with the Afghan people where as a child during the war I saw a mass exodus of refugees into Iran where they were treated harshly as outsiders, labeled as thieves and rapists despite being the most gracious people who rebuilt many of the areas that were destroyed in Iran. They were builders, much like many immigrants who work in the U.S. doing the jobs that many are unwilling to do as they feel that the work is beneath them.

He asks my advice about life in the West…. I laugh and tell him that he is already doing very well, but if he really wants it then just two pieces of advice “Don’t forget where you are from, Don’t lose yourself in the glitz and the lights.” and “work harder than anyone else around you as nothing is beneath you.”

“Don’t forget where you are from, Don’t lose yourself in the glitz and the lights.”

“Work harder than anyone else around you as nothing is beneath you.”

As we near the destination I tell him, “Movvafagh bashi” (I wish you success.) He replies, “Shoma ham Movvafagh bashi.” with a very respectful tone, as one addresses an elder.

I shake his hand. I feel some calluses just as I had felt the calluses on the hands of some of the Afghan kids and adults in Iran during my youth. I give him a tip (because I know he will do something great with it)

Siting in my car, I take a deep breath and gather myself all the while thinking that I have changed. But, have I changed for the better or the worse? Has America with its abundance limited me in some way? Is the American dream a maze carefully constructed to direct a rat into its twists and turns showing me glitter and lights while my humanity is chipped away at each turn of the corner?

The knot in my belly unravels. I refuse to be a rat, I think to myself. I suspect that Mohammad will have to face that dilemma at some point in his life. The digital world we live in offers us many turns, it affords us instant gratification and social acceptance yet we become the rat that is constantly looking around the corner for the next proof that we are worthy, we need to be acknowledged and constantly stay relevant. Otherwise we die, at least the digital manifestation of us.

I refuse to be a rat.

I leave with this idea in mind that there is much more to life than stretching ourselves thin in these digital avenues. I will continue to engage however through my cartoons, soon to be released book, my coaching site and in my analog self! Time to do some deep work.