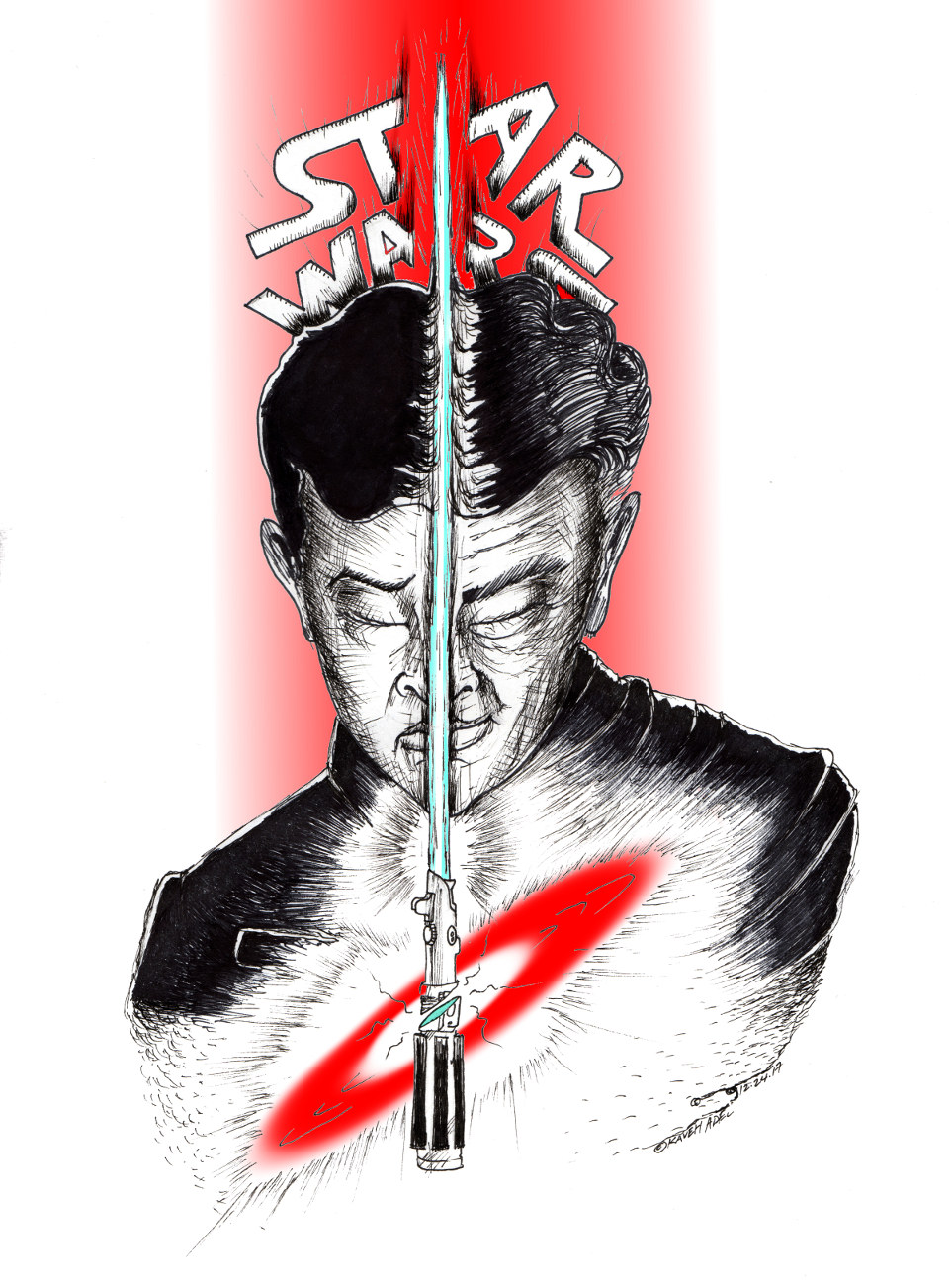 A week ago I watched the much anticipated premier of Star Wars “The Last Jedi” in theaters with my twelve year old son and brother-in-law–three generations watching a saga that spans 4 decades, each with his own ideas, take away and preconceived notions.

I can not speak for them yet as an ardent fan who grew up with the original films during the revolution and war-stricken country of Iran during the late 70’s and early 80’s I was torn when I walked out of the theater. 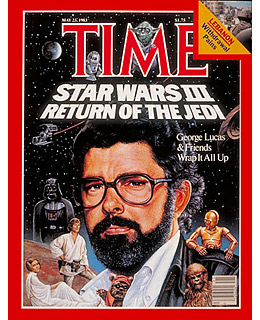 The 10 year old in me who got his hands on an old Time magazine (illegally brought to Iran) and cherished the full color photos or Luke Skywalker wielding his lightsaber on Jabba’s barge, X wings taking on the Death Star and the ultimate face off with Vader with the Emperor watching, gleefully reveling the conflict. That boy marveled at the mythology and the mystique where good and evil were more defined….. following a Joseph Campbellian hero’s journey. He saw a different film than the forty-something me.

If you have not seen the film then I advise that you do not read on as I reveal some details about the film that may spoil the mystery.

The ten year old in the body of the-forty-something-me, the boy-me’s take:

The boy-me was familiar with the defined premises of the previous films where evil was front and center. The dark lord is master and the apprentice follows his teachings and does not deviate. The formula was set in the original films, prequels, Rogue One and Force Awakens. Snoke was defined as the ultimate rise in evil. He begged to be further defined, at least where he come from— putting to rest the speculations and theories from the time following the Return of the Jedi. He was disposed of despite showing his incredible power far exceeding Palpatine leaving the boy-me wondering what was the purpose of him anyways?

The boy-me was forced to ask, Is today’s audience so impatient that character development is a waste of their time? Is this a millennial-trait jetting by the boy-me from the 80’s who loved the mystery wrapped in an enigma?

The lightsaber battles during the “red room”scene left the boy-me in awe and rekindled the fire that drove the ultimate battle between good and evil…. yet with a twist. A moment of redemption for the film…. just a moment and after that it went downhill for the ten year old me.

First, Leia was blown into space yet she managed to display a power (a use of force) that defied physics and biology. Even for a fantasy space saga film it was a stretch. The boy-me lost all credibility from that point on. He just could not get past that. Deification of Leia was a nice move as an homage to Carrie Fisher but what did it add to the storyline? It was a display of the force by Leia, I get that. Maybe we will find out in the last film…. but how, especially without Carrie?

Secondly, Luke, the quintessential hero was found moping and complaining on the island just like he did as a young man on the moisture farm on Tatooine. Did his journey make him circle back, ironically, this time to being a bitter, frustrated old man waiting to die in seclusion? Following a hero’s journey, it seemed regressive where Johnson, reduced him to an ashamed, pathetic man who blamed himself for the problems in the universe…. running away, avoiding the challenge. This was antithetical to the Luke who faced the Emperor. A possible explanation is that when we get old we lose that fire. He does redeem himself after a light (out of character) exchange with Yoda and then returns via an astral projection to take on Kylo and his more robust, jacked-up, AT-AT’s on a red Salt Hoth-like planet in Matrix-esque fashion. An uneven handling of a hero at best. Johnson wanted to tear him down and then build him up but it was hurried and felt like a kid playing yo-yo with Luke. Frankly, Luke deserved a better arc from my boy-me’s point of view.  I faced some of the most difficult times in my life and I drew strength from Luke who made mistakes, redeemed himself yet did not spiral down in self-pity. Perhaps Luke would have learned that after so many years but no, Johnson felt that his vision of Luke was a different one. After all, it was his project and he did have full creative control.

The tangential story line following the adventure of Finn and Rose served no strategic purpose beyond bringing attention to the control of the first order (Empire) and the rebels in the hands of Arms dealers. It also was a seedling of a half-baked romance—again, hurried and heavy-handed—a far cry from the tension felt in the original films between Luke, Leia and Han Solo. It was a break from the intense interplay between Rey and Kylo Ren, more worthy of exploring, that paved the way for many more spin-off stories for future films.

In my constant strive to be open-minded and creative, as a cartoonist and an author, I look at symbols and icons that are solid and accepted pillars in literature and popular culture and find ways to either enhance or deconstruct them. It is fun to create a new myth from the rubble of a previously constructed idol.

Following this premise, I loved many elements in The Last Jedi ranging from handling the hero/heroine, infallibility of legends, interweave of politics and human rights, gender roles, the grey areas between good and evil, the frailty and triumph of humanity in face of failure and questioning necessity of redemption.

I know that there is so much to unpack yet it is worth noting that these are my opinions that stem from years of study (mythology, psychology) and life experience (living in a theocratic society, emigrating) and they vary from someone from a different background and time.

I have to give Rian Johnson credit for deconstructing the hero’s journey shortening the cycle for Rey while weaving Luke’s own journey of rediscovery simultaneously. Rey takes the reign after discovering that Luke is not master she had hoped for, initially, leaving her no choice but to dive into the cave by her choice. A departure from the role of master and apprentice, when she has to emotionally jolt Luke to wake up from his self-imposed guilt and be useful again. It is difficult to pull that off while injecting contemporary humor. He did well bringing a blast from the past with Yoda.

Speaking of Yoda and legends. I found setting the books and teachings of the Jedi ablaze absolutely refreshing. I love tearing idols down and bluntly emphasizing that the old ideas/religions do not serve the masses anymore. They need to be reduced to ashes so a new path is created. And, it can not be created from a book, or a master’s experience. It is created in the process. Here, Johnson eviscerates the Jedi and Sith constructs (literally splitting Snoke and then the lightsaber in half).

The final scene literally takes the broom to the most iconic weapon of Star Wars.

I was figuratively split on this idea. Disliked and liked it at the same time, cognitive dissonance-stricken.

Digging deeper, the emphasis on failure as a lesson toward usefulness is very encouraging. Luke, the master, is depicted hitting rock bottom in a deluge of shame and guilt while he receives a literal knock to the noggin to get that point whereas Rey and the younger generation thrive on that life hack—essentially shortening the learning curve. In today’s world where production and perfection is expected for success it serves as a reminder that humanity and ingenuity are born from failure and imperfection with a healthy serving of persistence, Rey is the champion of that virtue.

I thoroughly enjoyed the political and human rights undertones in Finn and Rose’s mini adventure at the casino where they tear apart the underbelly of greedy arms dealers feeding both political powers in the universe exposing the hypocrisy of seemingly righteous while children and “work horses” are exploited for profit. And we wonder why the downtrodden and disgruntled rise, resist and revolt in our world. If that was Johnson’s point, it was very well made. It did not bode well with some who politically in the current climate did not accept the premise.

I found Rose’s insights on the light speed tracking particularly important. It was finally a female technician (seemingly low on the totem pole) who puts the pieces of the puzzle together while Finn seems to overshadow her yet she pops up again to assert herself!  Also, admiral Holdo sacrificing herself to save a few remaining rebels and Leia, showing that leadership, restraint, courage and selflessness are not exclusively male badges. Both wins for gender equity and rights.

Johnson navigates good and evil in the red zone where it is not light or dark, black or white. There is color there and it’s bright, where it is—dare I say—actually tolerable to possess both and grapple with that dichotomy. One can not always be an ascetic Jedi monk and expect to survive and navigate the world just as one can not expect to be a genocidal Sith dictator while carrying on life as usual without facing resistance. Rey and Kylo Ren’s relationship exploring this theme is palpable throughout the film and beautifully illustrates this. The older me wished there was more of that and less side stories like Poe Dameron’s gun slinging killing so many rebels so he could just take down a dreadnought.

Finally, despite the boy-me’s strong dislike of the way Luke’s arc was handled, the 40-something-me loved the redemption and the send off Luke delivered, especially the moment between brother and sister. Johnson handled that beautifully enough that I was willing to overlook the astral projection fight scene with Kylo, shoulder brush, smirk and the “kid” comment culminating to the final Lotus-position fade away.

So, can the traditionalist boy-me and the progressive older-me reconcile this dichotomy? I admit that I felt, as a good friend of mine said, “left my land cruiser on the seat when I left the theater.” As harsh as it may sound, the ten-year-old me partially died in the theater yet the forty-something-me was excited by the themes and ideas that resonate with the world today. I would characterize the film as an Anti Myth and it served its purpose very very well.

I suppose it is time to embrace the wonder of a new legend that idols are fallible and just about any idea can be challenged, deconstructed, toppled, recreated and mythified to the time we live in where being in the red is preferred over siding with the light or the dark.

Peace and may the Force be with you all,