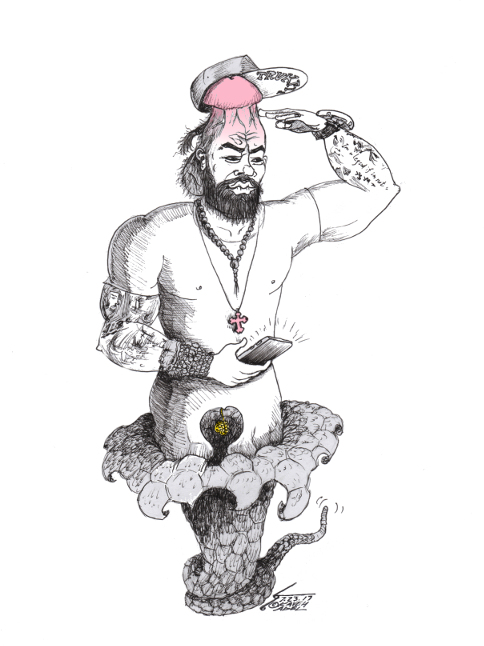 My latest cartoon pertaining to #Iran #amirtataloo ‘s #اميرتتلو asinine comments on social media about #hijab and how it prevents #sexualassault against young girls and women. He is a singer/rapper in Iran who is popular with the IRI regime after having a change of image and throwing his support in the last election behind the right wing/fundamentalist candidate.

His insensitivity toward the recent gruesome murder of a young girl in the hands of a male sexual predator is beyond stupid. Blaming such heinous crimes on lack of proper hijab and disregarding the role of the criminal and the culture of exploitation is beyond sanity! He and those like him (who follow and support him) are just tools shedding the skin of such corrupt mindset perpetuated by serpent-like ideology of misogyny in the current Islamic regime.

He is truly a #dickhead because prevention begins with #men and culture of #misogyny.  So, I call this and him #amirdoodooloo #اميردودولو since his brains are on loan elsewhere.

Wish everyone Peace and sanity,