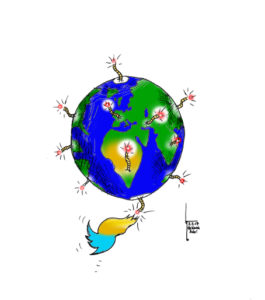 Today human communication even politics and world domination is reduced to a tweet.

Twitter connects people but also it empowers them to torch one another behind a veil. Words matter and intentions as well. Most are lost in translation and one wrong interpretation can create an global crisis.

I am reminded of the words from a Roman Senator, Playwright and philosopher Seneca. He said,

“All cruelty springs from weakness.”

Has humanity become so weak, so cruel that it has to hide behind 140 characters?

Tweetageddon.  I am just as guilty as I participate in it.  I have to participate to stay abreast of human condition.

To love and peace,