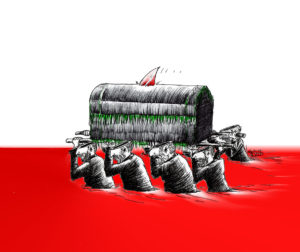 Rafsanjani, one of the original “founding fathers” of the Islamic Republic of Iran is dead. Heart attack. Besides that, history should remember him by the name people gave him during the early years of the revolution: The Shark (Kooseh in Persian)  Unfortunately, many do not remember nor want to remember his actions that lead to hundreds of thousands of Iranians as well as amassing a fortune for himself and his family through his corrupt dealings while in power…. No…. many look at him as the beloved face of the “reformists” in Iran. Once a shark, always a shark.  History remembers…. people’s memories fail and make him into a martyr while they swim in the blood he shed, lives he destroyed, families he dismantled and resources he squandered… all under the cloak of religion and theocracy.

I pity those who celebrate his life and are saddened by his death.

No love and no peace upon him and his kind.