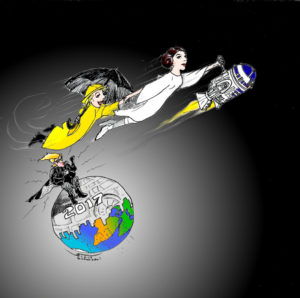 The year 2016 was a tough one for artists, actors, musicians, politics and the Earth.

One of my favorite actresses/writers/heroines of all time passed away suddenly–Carrie Fisher.  I idolized her (despite me being a man) because she epitomized strength and grit, qualities that were suppressed in women in Iran in the 80’s after the revolution.

In 1983…… nearly 6 years after Star Wars, A New Hope was released I sneaked out of my father’s house in Iran during the war. Two of my friends and I took a bus to the north side of Tehran to a theater inside a bowling alley/sports club called “Boolingeh Abdo”…. we were the only three souls in the theater watching the film. Fantasy films were outlawed after the revolution, especially after the war started. But somehow we got to see the only screening of the film. Later, my friend Amir got the Betamax tape of Empire Strikes Back smuggled in by his parents. We watched it so many times that we were afraid the tape would tear.

Carrie Fisher as Princess Leia was etched in my mind as a strong-willed, no-none-sense, take-charge yet sensitive and beautiful woman who happened to be a leader and a heroine. She was in real-life nothing short of that who had her own battles yet plowed through life with grit. She was so much more than her character and touched the lives of many across the globe including a young boy like me that women can and must be viewed as strong, independent and resourceful (even though I knew that from observing my role models in my mother and grandmother.) She will be missed in the physical form…. She was unfortunately joined by her mother, Debbie Reynolds–another icon in her own right. “Singing in the Rain” was a song that my mother hummed during my childhood from time to time. Of course, Kenny Baker, the man who gave R2D2 life also passed away this year.  He humanized a can of metal so beautifully that even today there is more humanity shining through his performance than many who are unaware and ungrateful for that gift.

So, she is with the force now, and the Force is with her, as with her mother and Kenny!

I wished for a 2017 that would turn the tide on premature Death and destruction.