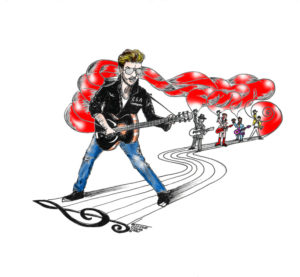 My better half has been and will always be an ardent fan of George Michael for his talent (heavenly voice as she calls it–and I do agree), his humanity, his sense of humor and even his occasional folly. I also really enjoyed his music as a teenager and beyond that got me through some really tough times during my adjustment in America after immigration. I was fortunate enough to see him live in Athens Olympic Stadium in the “Circle of Faith” with her…. if it wasn’t for her badgering me to go across an ocean I would not have experienced his showmanship and pure range…..she was as close to heaven as one could imagine.

He was also able to make fun of himself and that to me made him an artist who was down-to-earth despite his immense range musically. I feel it for his family, fans and my better half yet I choose to remember him alive through his music and what he accomplished as an artist and also his philanthropy. Humanity lost another gem. To quote him, dear George, “You have been loved”#gonetoosoon #youhavebeenloved

His love for music and those around him is shared with many artists we lost in 2016 and before…. all too soon…. They will have an amazing musical gig….wherever they may be! Personally, I would love to hear a version of “Somebody to love” with Freddie Mercury, David Bowie, Prince and Leonard Cohen….

See the Cartoon titled: Tribute to George Michael “You Have Been Loved” By Cartoonist, Kaveh Adel on Facebook
2016©KavehAdel.com