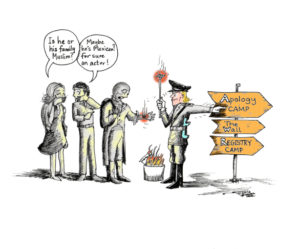 All that being said, they serve all of the citizens and residents of this great country and they are held accountable as all previous Presidents and vice presidents have been. They will swear to uphold the constitution of the United States of the America.  That, of course, means that all inalienable rights outlined must be upheld. However, the rhetoric and choices for the cabinet seem to skewing toward singling out certain minorities, and those who have a certain religious belief–speaking of building walls and a registry for certain faiths.

When this is brought to their attention it is swiftly countered by a Twitter-storm.  Granted that twitter is a form of communication yet it does not address the scope of a deeper debate centered on protection of rights.  Demanding an apology for having a discussion in a public forum, a theater, as the cast of the Musical Hamilton in New York City did, is a cop out. A simple answer for the future President  could have been that your concerns have been heard!

I hope, that those freedoms that we all cherish and sometimes take for granted will still be rights we can proudly display in the next four years to come. We all want to work toward further progress and the greatness that America has achieved and will achieve, together. This has to happen without divisive language and actions, by acknowledging the greatness of diversity and ingenuity of this country.

See the Cartoon titled: “The Registry”  By Cartoonist, Kaveh Adel on Facebook
2016©KavehAdel.com