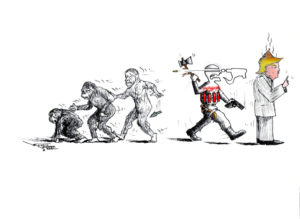 We are on a path where our humanity is halted by ego, divisiveness, rage and terror.  Our predecessors may have regrets being associated with humans.

Terrorism is one of the symptoms of fear–fear of loss.  This perceived loss of control over physical and even ideological sovereignty fuels rage which is misguided. Radicalized individuals and groups crave a target that is just as irrational as they are…… Alas, today we have individuals on the verge becoming powerful provide such groups with a target fueling differences instead of finding commonalities.

Rhetoric of terror is just as destructive as a polished facade of the beliefs expressed by a bigot who fans the flame. Hence, a savage action is a step toward the devolution that allows such action and retaliation to it to be acceptable by a civilized, democratic society.

I wish for a day where our natural selection is to be inclusive.