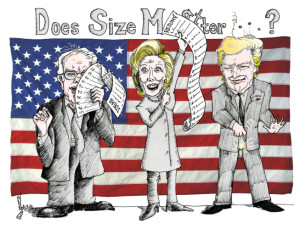 The political debates in the run toward the presidential election in the U.S. have been reduced to a “size” matters rather than the real issues that will move America and set it on a path toward prosperity, leadership and progress in the world.

It has become more about a kindergarten/middle school/high school popularity contest than an intellectual understanding, problem solving and cooperative discussion.  Author Isaac Asimov said it best many years ago,

“There is a cult of ignorance in the United States, and there has always been. The strain of anti-intellectualism has been a constant thread winding its way through our political and cultural life, nurtured by the false notion that democracy means that my ignorance is just as good as your knowledge.”

We hope the antics, bigotry and divisiveness of Donald Trump can be finally exposed and a nation’s attention turned more toward the progressive ideas of the future and experience that is necessary to move a capable and hungry-for-meaningful-progress populous in the right direction.