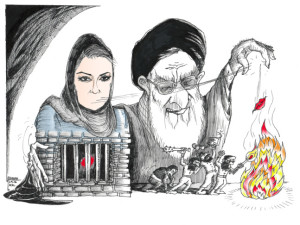 A young Iranian Poet, Hila Sedighi was arrested and released on bail a few days ago by the Islamic Republic regime of Iran.  She awaits charges while she is not allowed the leave the country.

Chances are her words are deemed more dangerous than the moronic (dare we say animal-like… no offense to animals) actions of thugs setting the Saudi Embassy on fire in Tehran in retaliation to brutal Saudi’s beheading of a Shia Cleric, Al-Nimr, for speaking against Saudi’s.

I suppose words are deemed more dangerous than actions because words have residual powers than can span years.