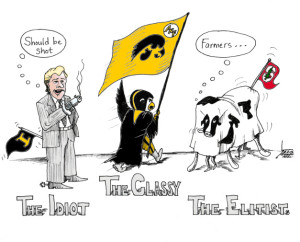 I admit that my Alma Mater’s Football team was absent during the first half of the 2016 Rose Bowl game against Stanford. I spent well over 15 years of my life in Iowa City cheering the Hawkeyes through their best and worst years… because that’s what Iowans do.  As a High school, undergraduate, Dental student and also a practicing Dentist who proudly graduated from the University of Iowa receiving a world-class education I learned two things while living in Iowa, Be Persistence and Have Perseverance.

Iowans are nice because the people who live there are raised that way. We respect the hardworking folks, including the farmers, who work their tails off so others can feed their families. That’s why a decal with the  acronym “ANF” standing for America needs farmers is on the helmets of the players. We also gracefully accept defeat and  celebrate victories with class. So, Congratulations to the Stanford Football team for playing a superb game of football and keeping the pressure on my Hawkeyes to the end.  And and tip of my hat to the Hawks for not quitting and coming back in the second half to fight on. There will be another season.

This year has been rough for Iowa for another reason, the President of the University, Bruce Harreld.  When I found out he was chosen as  the next president I said to myself, “O.K. let’s see what he has to say.” But in his speeches he clearly had no clue what it meant to have the Iowa Spirit–what I mentioned earlier. Rattling off Wikipedia page information is not really a good ice-breaker. But I gave him a chance until his “Should be shot” comment pertaining to improving Graduate student teaching surfaced. That’s when it dawned on me that this guy is an idiot.

Yeah, I said it. I am still Iowa nice and could have been much more colorful in my remarks about him but here is why,

On November 1st, 1991 I was in Iowa City in the biology building working in the lab on the ground floor while next door in the Physics building (Van Allen hall) 4 innocent individuals were murdered, and a few minutes later 2 more were shot and killed in Jessup Hall a few blocks away (including the killer himself).  One was wounded and paralyzed and for years I would see her in her wheelchair around the campus….. a constant reminder of that horrible day, thinking to myself, what if the killer would have walked into the biology building instead as he made his trek from the Physics building to Jessup Hall?

You see, that was the worst mass shooting in Iowa City history.  And it involved graduate students and faculty. One would suspect that the President of a prestigious University would be cognizant of this.  But not good-old-off-the-cuff Bruce. So the name Idiot suits him.  Frankly, Iowa deserves much better.

Now about the Stanford Marching band…… Well, Stanford is a very respectable school and undoubtedly some of the smartest and brightest minds in the world teach and study there. Yet I have a tough time wrapping my mind around the antics by their marching band poking fun of farmers ( supposedly painting Iowa with a broadest brush stroke by those who really don’t know much about Iowa) To me it was like watching a Donald Trump speech (debatable if his words qualify as one) unfold in the form of an organized buffoonery…. bigoted, elitist and just plain rude.  Now, I know that Stanford students are much more eloquent and abundantly more intelligent than Trump.  But why would their marching band stoop to his level on the field? Was it Tradition? Or possibly compensating for something? I suspect not but I would love to hear a logical explanation.

In my book the Hawkeyes exhibited class, perseverance and persistence until the end.  And, I again congratulated the Stanford team on their well-deserved win exhibiting great mastery of the game of football.

Kaveh, a bruised yet determined Hawkeye