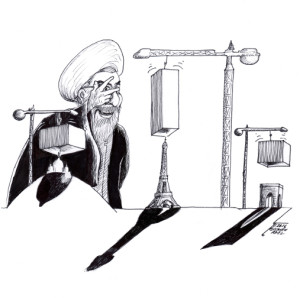 President Hassan Rouhani visited Italy and France this week.  The Italians, showing respect to his Islamic faith, covered nude statues in a museum where he was scheduled to visit with boxes.

Apparently anything that could be interpreted as a sexualized object can be offensive to the one interpreting it.

Apparently cranes can be used to cover offensive landmarks with boxes or are welcomed as hoists to hang those who criticize an establishment.

To furthering peace while respecting human rights and freedom of thought,