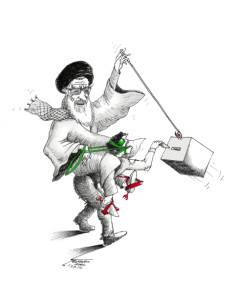 Ali Khamenei, the “Supreme” leader of the Islamic Republic of Iran recently had to “clarify” his position in allowing candidates for the Assembley of Experts (who chose his eventual replacement) as well as the Parliament.

Sounds like what a delusional emperor would say. Reminds me of Napoleon Bonaparte.

Meanwhile, Iranian people suffer under this reactionary and tyrannical dictator.