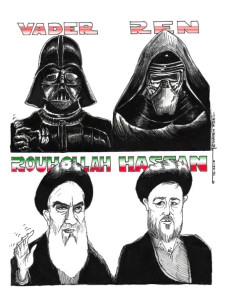 Cartoon titled: “For the Legacy”
2015©KavehAdel.com

I have been an avid Star Wars fan from an early age even when the films were chopped to pieces and I saw them in Iran after the Islamic revolution. The mix of masterful story telling, aided by Joseph Campbell’s “The Hero’s Journey” taking me through mythologic characters and stories reminiscent of Homer’s Odyssey and Ferdowsi’s Shahnameh, Jules Verne’s classic stories and beyond.

The new film “The Force Awakens” reinvigorated my love for story telling and reassured my hunger for gaining the story thread and mysticism in it that was lost in the prequels.

My other love is political cartoons and always looking for angles to connect current events in Iran, the United States and the world.  So, when I read the news about Hassan Khomeini, the grand son of the  Rouhollah Khomeini (the late mastermind of the Islamic Revolution in Iran), entering the political race –specifically entering his name for the Assembly of Experts who choose the next supreme leader of Iran– I jumped at the chance.

Darth Vader was and has always been the quintessential villain in the Star Wars series yet Kylo Ren has been cemented in episode VII as the new face……. rebuilding the dark legacy. Khomeini also left a legacy in Iran’s history.  It remains to be seen what his grandson Hassan will do. Watching the film may make the last sentence sink in more deeply!

For the sake of people this is one time that I hope that mythology in movies do not parallel reality.

To peace, love and new mythologies being written bringing hope to the world,