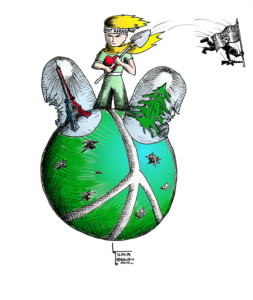 As I was cleaning my art studio, listening to music to give me inspiration to write and draw the next panel on my autobiography I was oblivious to the news of the horrible events in Paris and Beirut.

These acts of inhumanity have become common place an they are becoming a norm as we are outraged and a few months later we are back to  normal.  Much like the school shootings in America, beheadings in Saudi Arabia, hangings in Iran, Persecution of Political prisoners in China, rapes in Africa and so much more.

But this time,  I saw  awakened citizens in Paris, united,  holding a a sign in a mass vigil saying “NOT AFRAID”.

It is now up to us, each one of us, each little prince and princess to rid Earth of the Baobabs. My heart aches for Paris and Beirut and I understand the call for #prayersforParis or #prayersforBeirut , yet I subscribe to living life to the fullest. So #parisisaboutlife seams more apt and a powerful response to hatred from the extremists like ISIS (DAESH) or the Al-Qaida, the Supremacists and racists in this world!

It reminds of a very deep piece of writing by Lebanese-Born author, Khalil Gibran, who said,

“I have learned silence from the talkative, toleration from the intolerant, and kindness from the unkind; yet, strange, I am ungrateful to these teachers.”

To peace, love and not being afraid.