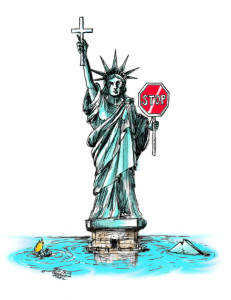 When I came to the U.S. as a refugee and Landed in New York many years ago the Statue of Liberty, Lady Liberty, was not holding a cross in her right hand….. She still, proudly, holds a torch lighting the way to liberty and pursuit of happiness for all.

Of course many Republican candidates for the presidency seem to think otherwise especially Muslim refugees from Syria and this cartoon is a rendition of lady liberty if one of the extremist candidates happens to become the president.

To the day when there will be no debate about granting refuge to those who genuinely dream of a life of freedom, devoted to service to the life of others.