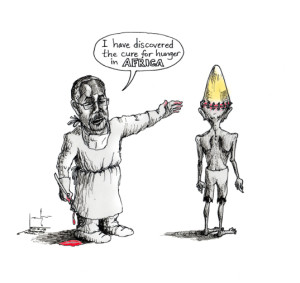 The Republican  presidential candidate, Brain surgeon, Dr. Ben Carson believed (more like theorized) in 1988 that the Great Pyramids in Egypt were Grain stores. and defended it again recently on his campaign trail. He said, “”My own personal theory is that Joseph built the pyramids to store grain, Now all the archaeologists think that they were made for the pharaohs’ graves. But, you know, it would have to be something awfully big if you stop and think about it.”

Combining his exceptional power of deduction with his surgical skills he may just have found the cure for hunger in Africa!  Just don’t ask the coneheads to weigh in on the subject!

It certainly makes life interesting for a cartoonist.

To Peace and Sanity!