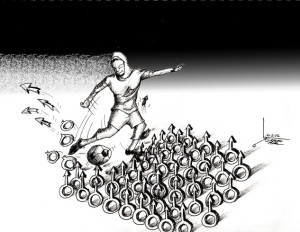 The Iranian women’s Futsal team won the AFC competition decisively and with style.

The controversy about their captain, Niloufar Ardalan, whose husband prevented her from traveling by keeping her passport and not granting her departure (it is a law in iran that husbands must grant permission to their wives for travel) did not stop the team from accomplishing a great honor.

Nonetheless, it is and will always be a thorny field for women in iran to be on equal grounds with men.  Whether it is on the Football field, or it is in life.