Political Cartoon: “Back to the Bibi” By Kaveh Adel Iranian American Cartoonist 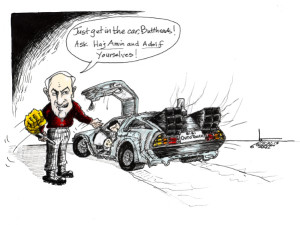 Benjamin “Bibi” Netanyahu managed to travel back in time in the Delorean to make an off-based remark about origins of Holocaust claiming that it was masterminded by a Palestinian Grand Mufti of Jerusalem Haj Amin Al-Husseini instead of Adolf Hitler.

See the Cartoon titled: “Back to the Bibi”By Iranian American Cartoonist, Kaveh Adel on FACEBOOK
2015©KavehAdel.com