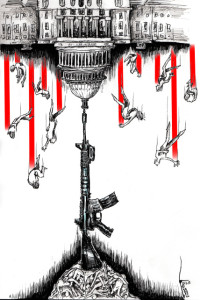 Umpqua Community College in  Oregon, U.S.A. on Thursday morning was a scene reminiscent of Columbine High school….. yet another massacre.  Yet by another individual who may have had psychological issues…… a man who had access to and bought military style assault guns with full military gear and magazines.

As president Obama said we have become “numb” to these types of horrific massacres….. why? and Stephen Colbert defined our insanity eloquently by saying, “One of the definitions of insanity is changing nothing, and then pretending that something will change.”

Praying and being present helps the victims’ families but it does not solve this recurring problem.

There is no one answer to this but what is real is that politicians have been dragging their feet on this epidemic and divisive issue. It is as if their loyalties have been turned on their heads……. all the while the humanity whom they are supposed to be protecting are all but grounds for a monument for a invention that was meant to protect their rights…… to be alive and pursue happiness.

When common sense is replaced by ulterior motives then things have to change.

It is time to stop being numb to seeing vibrant human beings gunned down by weapons that are meant to do mass slaughter!

Until then, we must make these promises real…. We must have these images become so visceral that we do everything in our power from preventing it from happening… yet again.