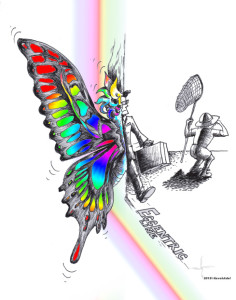 As children we were constantly told,

Your creativity does not make sense to anybody else.

Sadly, as adults we fall in line and follow the predetermined steps and paths before us.

We thread the fine line of eccentricity. Blending in just enough to avoid being caught and labelled.

I asked someone what does the word eccentric mean to you?  The response I got was interesting….. It ranged from  transvestite to transgender to odd……

I thought for a moment that society, mainly media, has done a superb job of erroneously defining the word eccentric.  To me eccentric means Dali, Einstein, Marie Curie, Steve Jobs, Temple Grandin, Elon Musk, Stephen Colbert, Frida Kahlo and so many other brilliant individuals in this world who moved the needle of progress and humanity.

To that effect, I declare…… Embrace your eccentric self and refuse to be defined by lines.

To moving the posts.