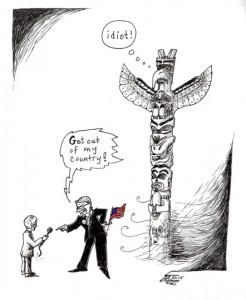 In my earlier years when I emigrated to the U.S. and before I became a naturalized citizen I hear this phrase, ” Go back to your Country, you _____!” Any immigrant can fill in the blank with a word that is derogatory and specific to one’s cultural background. I admit I grew up hearing it much less than many of my friends. I lived in a relatively well-educated town in the Midwest of the United States.

Yesterday, Donald Trump shut down Jorge Ramos during a press conference and later one of his aids used the same phrase that I had heard before addressing Ramos (a naturalized citizen).  Now, granted Ramos did not wait for his turn to be called upon to ask a very important question about immigration and kept talking.  However, the way this scuffle was handled shows an endemic problem present yet still in America.

Ramos was asked to return and had his chance to ask his questions but damage was already done.

You see, admitting presence of a problem and working cooperatively to solve it generally produces a win-win result instead of a dismissive attitude…

Technically America does not belong to any specific immigrant, race, creed, skin color.  The beauty of America is its ability to absorb the best of everyone and the ugliness of it is amplifying its worst.

To cooperation and cohesiveness. The native Americans believed in respecting the land, its resources, its visitors and even the game they hunted for survival. Maybe, that is something to revisit.