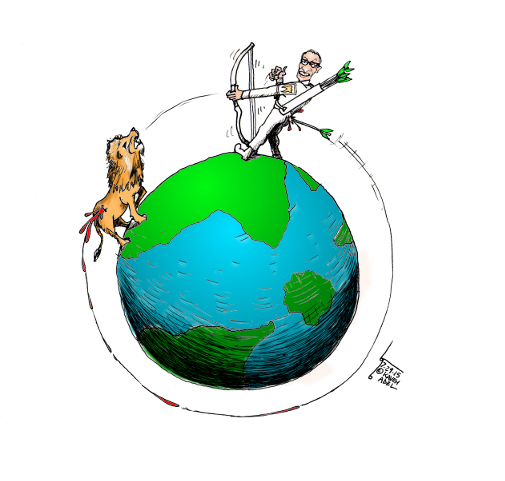 I am a cartoonist by night but during the day I took an oath to heal and help those in need– I took a Hippocratic oath, Do good, Do no harm to my patients.  Yes, I am a Dentist and I work with people.

My Hobby is to draw and I understand that each individual has an interest in this world that is worth pursuing.  A person, Walter James Palmer, who happens to be a Dentist (that remains to be seen in the future) from Minnesota in the United States, recently paid around $50,000 to hunt for lions in Africa.  He shot a beloved Lion named Cecil who happened to be a monitored animal for research.

He thought he was pursuing his hobby.  It did not seem that way to the rest of the world, especially in the manner this defenseless animal was lured, hunted, wounded, shot and then decapitated.

World reacted and the hunter became the hunted. This has returned to affect this person’s livelihood as a Dentist, most likely ending his career as a healer.  I suppose his oath only stopped at humans. Nature and universe do not see the difference.

I am saddened by Cecil’s death but hopeful in humanity’s strive to keep itself in check.

Love, peace, healthy teeth and respect nature and all its creatures and creations,