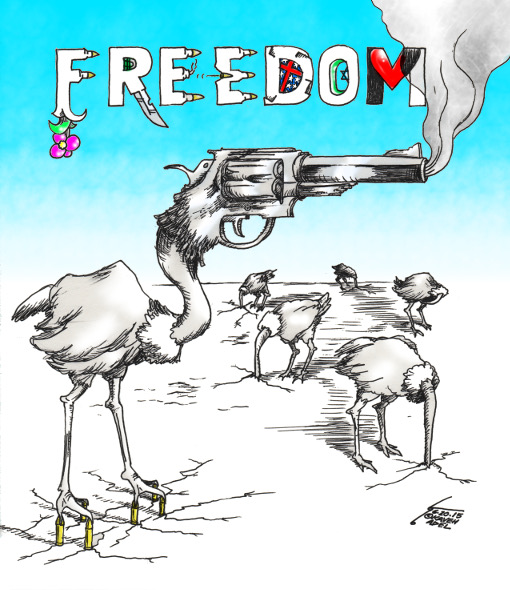 President Obama in a statement after the Charleston Terrorist Attack said,

“I refuse to act as if this is the new normal or to pretend that it’s simply sufficient to grieve and that any mention of us doing something to stop it is somehow politicizing the problem,”

I agree, yet we have heard such rhetoric before and once the anger, sadness and acceptance has fizzled away the public develops amnesia and the politicians move on saving their rears as this is an issue that could cause them their political career in America. We act as if these types of horrific acts are “accidents” or isolated incidents brought on by “ill individuals” and are encouraged to stick our heads in the sand and just pray. How many more Charlestons, Columbines, Sandy Hooks and others do we need to endure to realize that our problem is endemic and radical change is needed.
We are granted and have fought for freedom to love, to practice our faiths, to cultivate the Earth, even to bear arms but we have also become accustomed to the “Freedom of Complacency.” We have turned a blind eye to the consequences of such freedoms affecting others, undermining others and in effect imposing and many a times taking away the rights of others– the worst imposition, taking their lives.
I sincerely wish to draw cartoons that are more light-hearted and deal with issues that improve humanity not highlight the horrors caused by inhumanity.
love and peace,
Kaveh