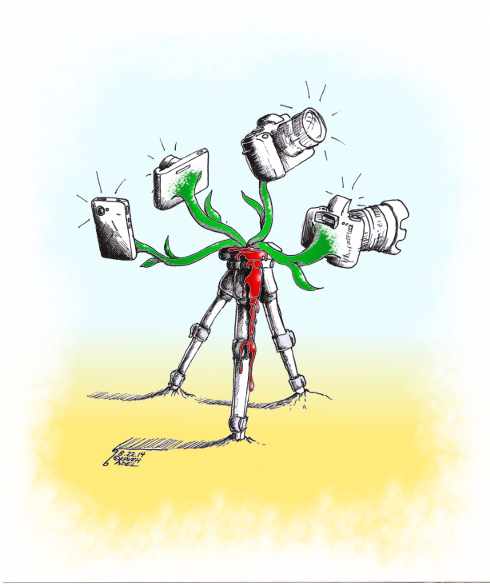 Last week, as I witnessed the horrific news of an innocent journalist James Foley death in the hands of an ISIS thug and listened to his parents, siblings and colleagues I had to pick up my pens to draw about the subject of innocent lives being used as a weapon.

On the same token, his life along with thousands more indigenous people whose lives were taken in the same fashion are just as meaningful, yet they remain nameless. He tried to capture their story and paid the price.  His cameras told stories and gave faces to the numbers we hear about everyday in the news yet we pass over them just like stock market numbers.  Sadly, we care about the latter numbers more!

We are assured by the spirit of humanity that many more cameras are “decapped” and ready to shoot these stories in the age of technology and citizen reporting.

James and many like him did not die .  Their lives are lived in the veins of those who are picking up where James-alike were left,  uncapping their lenses and are beginning their journeys telling stories of humanity in jubilation as well as horror.

My condolences to James’ Parents and loved ones and all those who have lost loved ones in this terrible struggle.

To love and peace, To courage and perseverance,