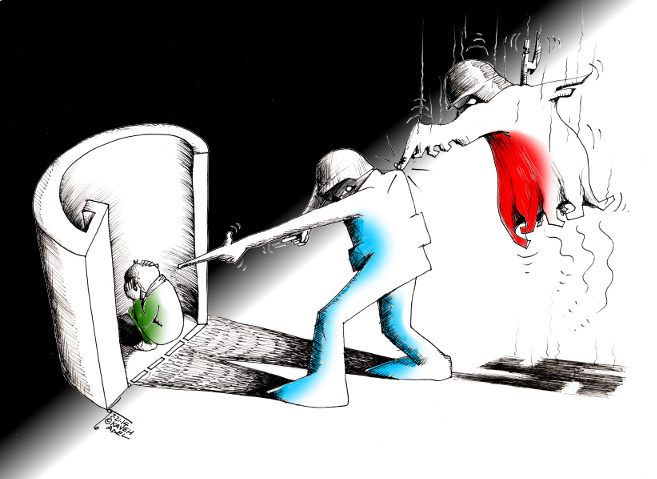 The unilateral military invasion of the #Palestinian territory of #Gaza by #Israel deemed as a surgical operation to rid #hamas has been brutal and continues to leave casualties on both sides yet in greater numbers by the Palestinians, many of whom are civilians and children.

The cycle of  will never end until the hard-line Israelis and Hamas accept the fact that the other exists and allow the other the same rights and privileges that any human being deserves. It will not happen overnight because the wounds are so deep but the way events have spiraled in the past several weeks there will never be an end to violence as revenge killings will continue.

Suicide bombs and tunnels, kidnappings and primitive shelling from Hamas will be the retaliation to the laser-guided rockets, Snipers  and ground assault from Israel.  And Israel will do the same, refuses to sit and talk to them directly instead ask a third party to broker a deal (that will undoubtedly be denied by Hamas). Why? Because taking away someone’s autonomy and the ability to make decision for themselves and designating someone else to be their “guardian” undermines their humanity and freedom. At this juncture they respond with a natural biologic response called fight or flight.  Flee or fight by any means necessary! Especially if they are cornered in a territorial cage.

Much like any group that is dehumanized. First, they are reduced to less than human, then their elimination is easily justified. This is how each side views the other.  This has been tried in history before many times and it failed and has failed over and over again.

Are we as humans capable of empathy? remorse? memory of history and images that mirror what we are about to do to others? Do we contemplate the consequences?…..

I am distraught at the news and images  and the escalation.  If we just take a moment and imagine what we are doing to the other person, seeing them as our own little brother, sister who has not yet understood the meaning of this division–this hate.  They are Innocent and pure but at any moment their life can be taken by a shell, a bomb, a rocket, hate killing or torture. Can we then  take pause and not point our finger, gun, rocket and our hate? Because there is always a ghost of a not-so-distant-past that may tap us on the shoulder to remind us of what has been and what not to repeat.

To humanity, to peace, to love