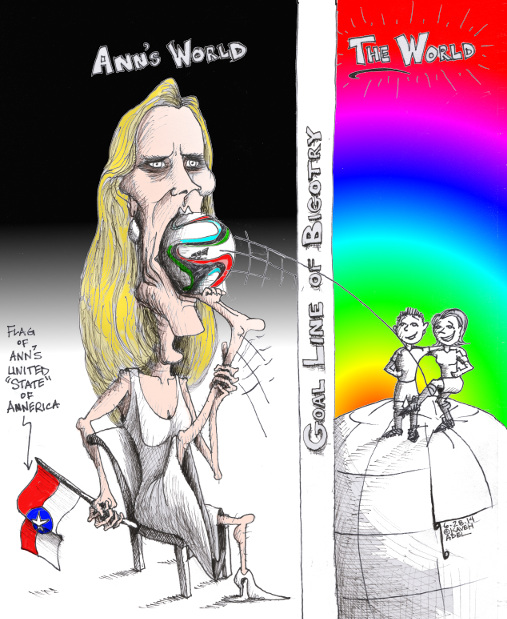 Ann Coulter can blab about Football (soccer) all she wants. If she really had a clue about the game I would take it seriously but as a cartoonist who is a naturalized citizen of the U.S. and an ardent supporter, player and a former coach of the sport I had to set her straight.  Anyone can pass judgment and have an opinion.  It’s a free country after all,  right?  And that’s what I love about America.

I say Stuff it Ann Coulter! Stick to talking about what you know best and believe me it’s not Football (Soccer).

Here is my response point for point ( I do suggest, though reluctantly because I probably could have done many more productive things with my time, to read her blitherings about Hating Soccer),

(1) On her point about Individual achievement not being a big factor in soccer,
I would Ann tell that to those who can and have literally change the result of a game in a glorious flash or suffer crushing defeat. We don’t have to go too far to find that evidence. The good ol’ U.S. of A’s men’s National team captain Clint Demspey who scored the fastest goal by an American in the World Cup history or John Brooks, another member of the USMNT,  scoring the goal of his life against Ghana winning the game. How about the Iranian goalkeeper Haghighi who was on the verge of becoming the goal keeper who shut out Messi(arguably one of the best players in the world) yet allowing a goal in at the 91st minute of the game against Argentina, a losing moment yet a glorious one simultaneously, one which he will never forget–neither will a whole nation.

On the whole MVP thing, at the end of every game there is an MVP(“Player of the Match”) but I guess one would have to pay attention and not flip to another channel since the attention span of a squirrel is better than someone who hates this sport.
On the whole fragile self-esteem bruising non-point,  having coached and played the game for over 20 years I would like Ann to speak to a child whose team just lost a football (soccer) game and see if anyone’s self-esteem was bruised. But that takes compassion and empathy that are hard to come by nowadays. By the way, I keep putting (Soccer) in parenthesis after Football just in case Ann is confused.

On the ball accidentally going in:  In all seriousness, and I am speaking as a player and a coach, the ball accidentally “curves” over a 6 man wall,  “bounces off “ of a players head at 60 mph  and is tucked away under a precise upper 90 degree corner of a goal post…. there is no design, or skill involved to strike the ball at all… none what-so-ever! All dumb luck. No athletic skill involved. Practically my 6 year old son can do it with his eyes closed, my grand-mother (may she rest in piece) would have been able to do it with one arm and leg tied! I wonder how the field goal kickers in American Football accidentally put the ball between the uprights? -Did any of them happen to have played Football (soccer)!

(2) On the lack of seriousness in the sport especially the Co-ed teams Ann should get out of her high heels and go play against girls or stand in the goal when a female Football (Soccer) player take s a shot, even better try to win a 50/50 ball in the air (or the ground) against a female player who is playing in a recreational league on Saturday morning.  The physical prowess and determination in girls on a co-ed team over shadows the boys.  I know because I have seen and mended the bruises on the players of my co-ed team when I started coaching! Those kids are not serious at all, neither are their parents! Nope, all they are doing is prancing around picking dandelions that happen to not bruise their self-esteem!

(3) On the scoreless ties and hyperbole about Michael Jackson, first of all, Football (Soccer) is played in halves not periods. Second, the game is appreciated when one understands the strategy (assuming one really desires to understand– I know that maybe too much of a stretch for Ann)….. It’s about the process not the destination. In baseball, many games can go into extra innings because it plays out that way and the same can be said about Hockey. A little Hyperbole to match Ann’s, some like their sex to be done and over with quickly so they can roll over and write about how much they hated it, others would love to enjoy the process just as much if not more than the pay off! Different strokes for different folks.

(4) On the whole injury, disgrace and humiliation being a requirement in sports, a spectator wishing such things  upon a participant is expressing a sense of Schadenfreude that in many cases would be regarded as a psychological problem. But I am not a psychologist! Physical nature of any sport guarantees contact and potential injury and in Football (Soccer) players are protected by a shin guard and a cup (for males) After a game a visit to the locker room will reveals a fair share of fractures, torn ligaments and tendons, bruised bones, concussions, contusions, broken noses, teeth and more. The only ribbon they get is an ace wrap wrapping several bags of ice around their injury site.

(5) On the no-hands rule, No hands? I suppose the goalkeepers use ESP to block shots or the ball magically is thrown in  using  “the Force” by all the other players when it goes out of play. By that argument, Ann’s demographic would suffer because then Hockey would not qualify as a sport.

(6) On the Force-feeding and the fact that Football (Soccer) catching on,  I suppose the number of participants in youth leagues and beyond are just a bunch of lies. Saturday mornings, parents are just being forced to take their kids to Football (Soccer) games as if they are slaves much like the constituents who read and watch Ann’s meanderings. There is no choice, it’s a conspiracy! These parents and fans are not excited at all when their child learns to kick the ball well for the first time in  a match or completes a passes or even score! Imagine how they force themselves to appear to enjoy that. Then after game (win or lose) they walk away learning a skill to compete gracefully. But, that’s not Ann’s way, we must destroy the opponent at all cost and humiliate them…… that’s not force-feeding an idea is it?

(7) On the “It’s foreign” argument, hockey and basketball had their origins in other countries and were created by “foreign” nationals (U.K., Ireland,  Nordic countries and Canada) It is worth mentioning that the Original basketball was a Football (Soccer) ball! Look it up. Basketball and Football (Soccer) also started at roughly about the same time in the U.S.  But doing real research is really not necessary. Speaking from the gut has much more credibility.

(8) On the the metric system conspiracy to brainwash us all,  If we were to use Ann’s “everyone-understands” system in our healthcare, for example, then removing a tumor that is an “inch” in a patient–which inch would be acceptable by the Surgeon? The width of the thumb of a man who is 140 pounds or 350 pounds? Since when precision has been a bad thing? By the way, there is not clear connection in Ann’s argument that Football(Soccer) forces us to use the metric system. FIFA rules of the game are written both in Metric and U.S. (English) customary units. Just saying that one thing is like something else does not  make it true without clear proof and evidence. Just as saying that Ann is blonde does not necessarily mean that she is a true blonde.

(9) On Football (soccer) not “catching on”, the actual number of people who watched the US. vs. Portugal game were 24.7 million but I guess Univision does not count as American viewership in Ann’s book. That number does not take into consideration the number of people who watched the game at bars and other outdoor venues such as Chicago’s Grant Park. And this game was a first round game.  It remains to be seen what the number will be for the viewership of the round of 16 game between the USMNT and Belgium. Until then, the only thing catching on is this

“ I believe that we will win”

and if that’s not patriotic enough for Ann (who believes in a single United state of Annerica–where she is right always) then I guess I am more American than she is!

About the Americans who are not post Teddy-Kennedy’s-1965-immigration-law “Americans”, I am an American and have watched almost all the games with most to my friends–many of whom I call my family–whose great grand parents were born here in the U.S. (Some of them I have coached and others whom I had the pleasure of calling my teammates when I played)  All of us Americans, collectively,  who did not get the chance to watch some of the games live, surely, recorded them and watched them after we came home after work (yes, we are hard -working Americans) with our children who have been born in America.  We are all humans who have dreams.  That is what binds us together and that common Dream, the American dream, the World dream compels us all  to say this…… Heck we scream it out loud from the top of our lungs,

Maybe Ann should learn to say this more often to support the America that she so dearly loves.

With love and respect for Humanity and spirit of freedom,