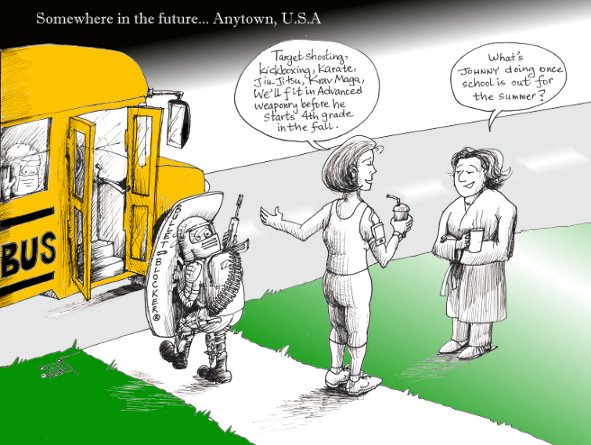 79 school shootings in 18 months since Sandy Hook shooting in Newtown …… Only in America. I love this country but we need to wake the F up!

I don’t want to see my children live in fear and have to learn to wear bullet-proof vests in school……Where that becomes the norm.  Why? Because their parents were too afraid to speak, vote and put pressure on politicians to take a stand instead of protect their pockets.

We are heading toward a future where our children have to learn to recognize what to do to defend themselves against guns and weapons, to learn hand to hand combat!  And we as adults don’t even second guess it……we become desensitized and complacent!  We accept THIS as the norm while we sip on our coffee.

I want my conversation with my neighbors to be about ours kids inventing the next great invention to help people in need, cure their pain, make them laugh not how to learn to shoot or prevent another from shooting at them.

It is a tough day to be human.