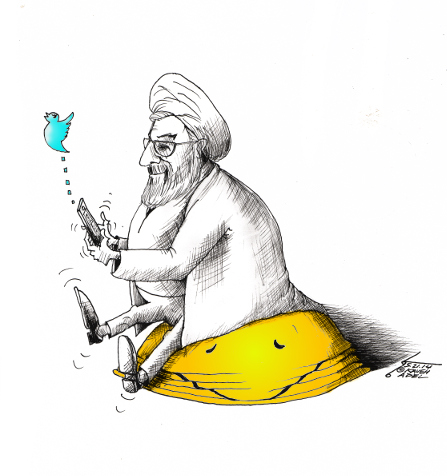 The 6 young people (  #freehappyiranians ) who were arrested for being “happy” in Iran are freed…….

Islamic Republic of Iran #President Hassan #Rouhani did not waste a moment to #tweet about #happiness in #iran using his “freedom” of expression to do damage control………  He wrote:

People of Iran don’t even have the right to express their views or feelings as Rouhani has done, how can they have the right to have happiness? Either he is completely disconnected from reality of what has transpired under his administration (definition of Neurosis) or he does not think putting 6 young people in jail for expressing their happiness is “not too hard”.

I am an outspoken activist for human rights and despite my surreal interpretations in my cartoons I am not that detached from reality!