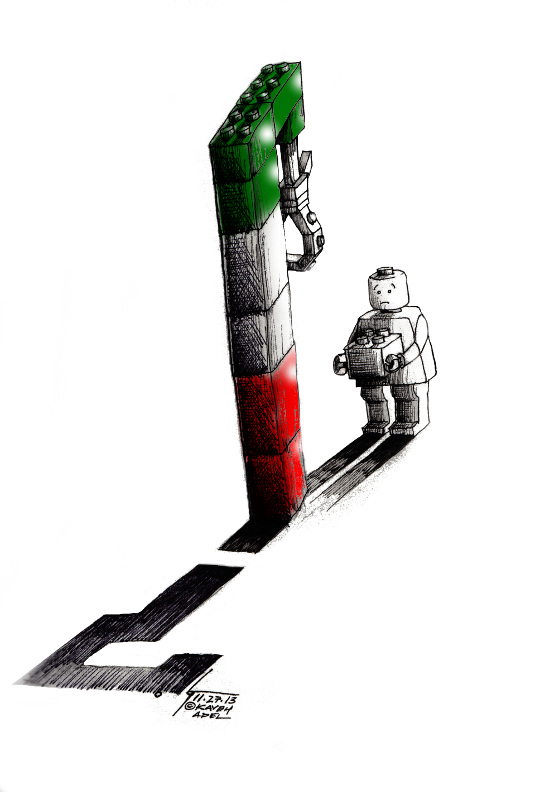 A few months ago I saw a news story about Iran where a young boy had gone home after witnessing a public hanging….. He recreated the scene……unfortunately, successfully.

I drew a cartoon about it in November of 2013. I never had the intention of releasing it but a record number of public and unpublicized executions happening even today in Iran how can the youth help but not be depressed, brain-washed and feel helpless so much so that youth are committing suicide. I felt compelled to release it…..

It is a shame…….. Behavior is learned, it is taught  and engrained from an early age.  I am reminded of the Song “Execution” by Okhtapus (Featuring Shahin Najafi and Majid Kazemi) about going to public hangings as a form of entertainment where the lyrics specifically point to this issue as a way to appeal to a higher sense of civic responsibility and humanitarian responsibility.  he says,

“Don’t bring your kid to watch,

Don’t let his mind be burdened by the Noose,

Or else when there is pressure on him tomorrow,

Else when he grows up and demands his rights,

Else when situations make him mad,

Violence will be his logic in society,

Then he might say, ‘Since everyone is bad, I became bad too’

He will fail the hard test of life…..”

My heart aches for the youth…… the innocent youth who should be playing and building a life , one block at a time not ending theirs with one block.