“her” Love for Life, meanderings of Kaveh Adel, the cartoonist about a film 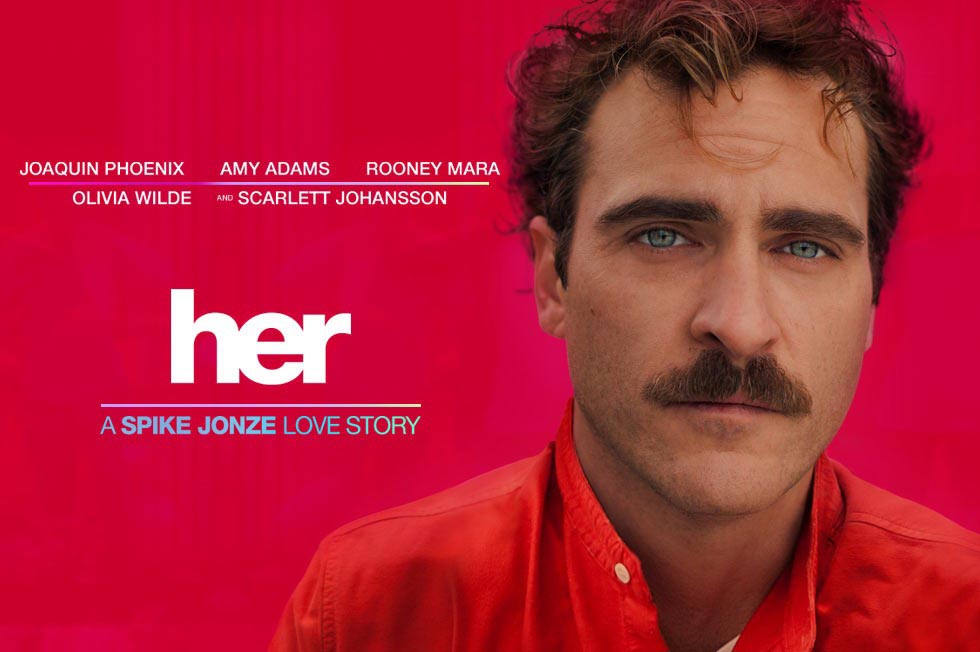 Film “her” written and directed by Spike Jonze

As I sat next to the love of my life, turning my cell phone off in the movie theater awaiting the film “her” to begin I was not prepared to examine, question and reassess my humanity as much as I did when I watched “The Tree of Life”

I went through a bit of denial.  No, humanity can not be like this…….  No, it WILL not be like this, I told myself. How can something ethereal teach ME, the human, the flesh and blood, anything about feeling and being alive? I admit, I was watching the film with the preconceived notion that it was the ultimate battle between technology and humanity. It could not be further from that after deeper introspection, of course.

A meaningful relationship is with anything or anyone who reciprocates it. It requires growth otherwise it no longer is. Theodore, the protagonist, refuses to grow until he faces his fear of letting go as do many other characters in this film. As cliche as it may sound, that is his journey.  But there is so much more to that over simplification.

The film reminded me then moved me beyond the lyrics in the song “Soul Meets Body” by Death Cab for Cutie,

“…I do believe it’s true that there are roads left in both of our shoes
But if the silence takes you then I hope it takes me too
So brown eyes I hold you near ’cause you’re the only song I want to hear
A melody softly soaring through my atmosphere.”

For a brief moment in time we are connected with others in our lives and for that we are defined. We either grow or shrink. We decide to hang on to that moment or create new ones.  It is only when are faced with our deepest fear of letting go of the ownership of the emotion that we expand as far as the universe, infinitely. We realize that we own nothing and belong to no one and yet we belong to everyone, and we have a vested interest in the universe. We are connected and we are grateful for it.

Spike Jonze, through his masterful direction, unspoken as well as spoken words, took me by the soul and danced me through the emotional, sensory and philosophical experience that even Alan Watts, Joseph Campbell and Rumi would have be proud of! His film embodied the line by Campbell,

“Love is the burning point of life. It bears all. Love itself is a pain. pain of being truly alive.”

Joaquin Phoneix (Theodore), was beautiful and crystalline as a true human…. not just a man, nor a woman… a pure soul, feeling trapped in a body.  The brilliant depiction of a sterile and emasculated environment, right down to the clothing forced the audience to really BE him and FEEL his struggle and joy.

Scarlett Johansson, as “Samantha” inherently was absent. But her voice, tantalized the audience…  was not just seductive, as one would suspect. She was challenging. Questioning the established laws, breaking them and creating new ones and then breaking them too while protecting the ultimate law, Love. She was Nut, the heavenly goddess from Egyptian mythology, who protects the dead as they are reborn at dawn.  If we look with our hearts we see “her” at the end of the film.

And, I am barely scratching the surface as I meander around “her.”

I would venture to say that this film is by far the best I have seen since “The Tree of Life’ which is my all time favorite film. I would invite anyone who is watching “her” to view it with an open heart and a burning desire for philosophy and mythology. Also, the music was perfectly congruent with the feel of the film, by Arcade Fire.

To Love and humanity, always.