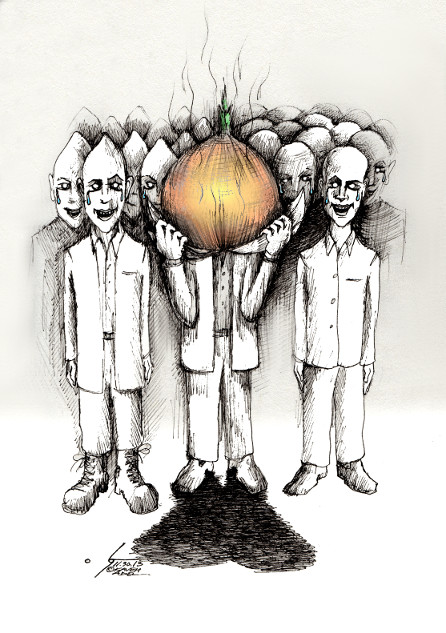 I remember in 1980-81 (right after the Iranian Revolution) seeing a play written by the German playwright Bertolt Brecht in Tehran that left an everlasting impression on me.  It helped that I grew up following my mother, Ezzat Goushegir, a playwright, in “City Theater” sneaking into the dressing rooms, makeup areas, backstage, under the stages and lighting equipment above… not to mention reading plays and political cartoons in the theater library.  She also did her thesis work on Brecht. My uncle also had a small part in this particular play.

It was not until years later that I truly grasped ( and continue to peel at the layers of this particular play) as I try to make sense of it in today’s world. Incidentally, I  recently had the privilege as a board member of Pasfarda Arts and Cultural Exchange non-profit organization sponsoring and seeing the world renowned Shahin Najafi, the Iranian musical Artist in Chicago’s Old Town School of Folk Music.  As I picked him and his band up from the Airport I had a very interesting conversation with him and Michael, the very talented Guitar player for Shahin’s band.  He happens to be from Germany.  We discussed how people perceive music, art and life in general.  How some are happy not digging deep and are content with just experiencing things on the surface and then there are those who live to unravel the stories behind even one lyric in a song, a line in a poem, a small section in  a painting or a cartoon and so on! It was, to say the least a reaffirmation for me that Artists are onions!

In Life, particularly mine, I have not rigidly felt a blind allegiance to one mode of thought versus another except humanity and human rights.  Nor have I felt that I belonged to a specific profession, or nation despite my strong feelings about where I was born and where I live today.  And when the subject of being categorized by my looks has comes up (physical appearance, clothing and suffixes after my name) I generally disengage from conversation and would rather read a book, analyze one line and unravel a meaning that enriches humanity instead!!

In fact the only mode of thought , taught to me by my mother has always been about peeling an onion. Unraveling mysteries within and without.

And my newest cartoon is Inspired by the aforementioned play by Bertolt Brecht titled “Round Heads and Pointed Heads” (in German: Die Rundköpfe und die Spitzköpfe)