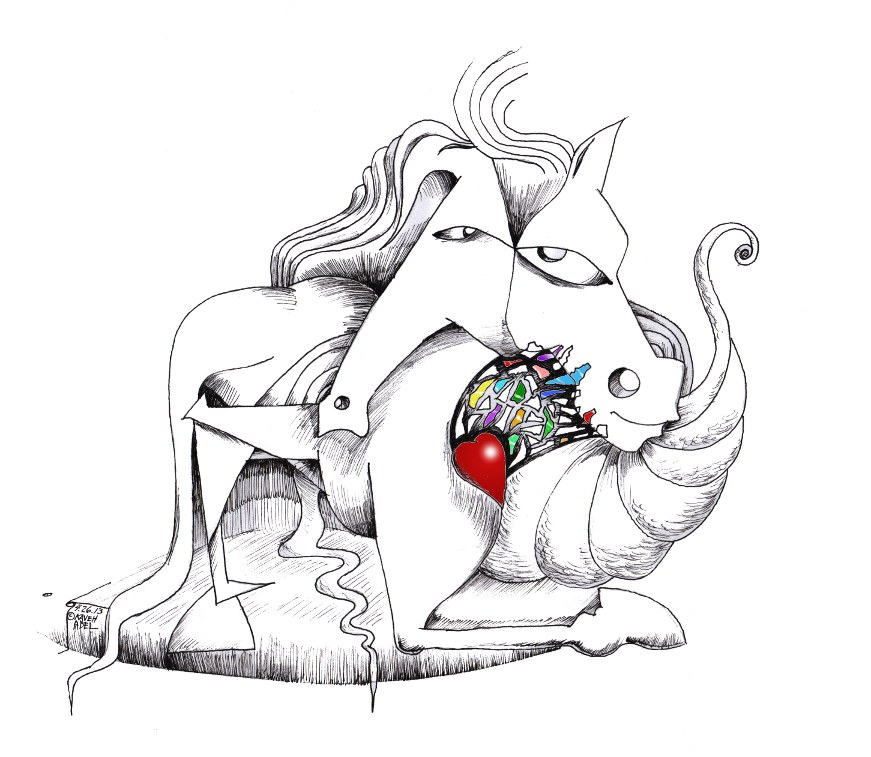 PicassDalGaudoya A tribute to Spain by Kaveh Adel

After my 6 day travel to Spain for the first time in my life (with my better half) I was able to cross off two items from my bucket list.  First Pablo Picasso‘s “La Guernica” and second was Fransisco Goya‘s “The 3rd of May.” These two painting have a special place in my heart as I grew up in Tehran during the horrific 8 year war between Iran and Iraq.

For a span of 6 months, almost every night, I remember sirens blasting. Rolling black outs as electricity was shut down.  Waking up in horror almost exactly at 2:00 a.m. running down the 4 flights of stairs in pitch black while anti aircraft guns shook the building and flashes of explosions in the air, much like the night-vision videos on CNN of Baghdad during Desert Storm, heart pounding out of my chest I kept playing the image of Picasso’s “La Guernica” in my head.

I slept in a bed locked against a wall, not in a room, a wall.  Opposite me was a book case, where my father’s books were kept and I could only see the back of the bookcase… and there was a poster of the infamous painting by Picasso…. “La Guernica”

I analyzed that painting every night I went to sleep.  I know every centimeter of it. despite the horror portrayed in the painting there was always a beacon of light.

As I ran down the stairs I imagined that light guiding me.  It was light of humanity at the end of all the horror.  Every night.  I owed Picasso a debt of gratitude.  When I saw the painting in person, two weeks ago at Museo Reina Sofia in Madrid I was not allowed to take a photo of it but I did not need one…. I knew it and I thanked Picasso’s spirit as I left.  Bucket list item one, checked off!

How about item number two? I used to listen in on the conversations my father had with a friend  of his (Mr. B) who was politically active during Shah’s time.  He was tortured, physically burnt and slashed with electric cables and psychologically damaged but was still sharp despite his tremors from motor nerve damage.  He witnessed his others friends executed in front of him. He spoke of idealism, conflict and aggrandizement….. and  Goya…. Goya…..GOYA!

I took it upon myself to look up this “Goya” and sifting through my father’s Encyclopedia Britannica and saw “May 3rd” and was mesmerized.  Mr. B’s fascinating challenges, thoughts and stories made perfect sense.  I envisioned him standing up with his hands up against the firing squad literally and figuratively.

I had the privilege to see Goya’s magnificent painting at the Museo Del Prado in Madrid.  I thanked the spirit of Goya, and in my head said “This one is for you Mr. B”

On my trip I was touched  briefly by Salvador Dali‘s work….. the artist from another time, as I like to think of him. I also, found out about Antoni  Gaudi….the genius from another planet! His architectural vision displayed in La Sagrada Familia Basilica, Park Guell and his absolute masterpiece Casa Mila (la Pedrera) inspired me to draw.

My sketch titled, “PicassDalGaudoya”  is a personal and intimate tribute to Spain and her children, Picasso, Goya, Dali and Gaudi.  They touched me in the past, in the present and unforgettably in the future.

To love and peace expressed in humanity,