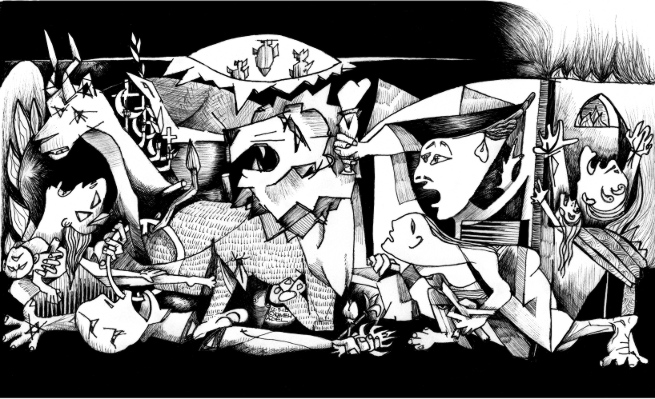 War is the rhetoric of the unreasonable,

The rhetoric of those whose humanity is long dead.

Whether it is the rhetoric of and by the powerful in Israel, Iran or Palestine.

As a child I stared at a large print of “La Guernica” by Picasso on my wall as air raid sirens would go off in Tehran, every night at exactly 2:00 a.m.

Windows were taped with large “X” taped so that the supersonic waves of Iraqi jet fighters, the explosion of their bombs, the repetitive booming of the anti aircraft guns and missiles and their blinding lights would not shatter and blind us in our sleep.

Fireworks in celebrations have a different meaning for me. No matter how happy of an occasion it may be.

I don’t want my children, or the children of my fellow human beings in Palestine, in Israel, in Iran, in Syria and ……. experience these horrors any more.

This sketch, “Palesraelranica,”  is my feeble attempt at recreating a 2013 version of  Picasso’s Masterpiece,“La Guernica.”

There is a better way.

There is a human way.

The key to peace is through the light of pure love for humanity,

despite its animal shortcomings of fear, of lack, of limited supply.

There comes a point that sharing a piece of bread is better than killing one another where neither would ever live to eat a bite of that bread.

Better yet…… working together, may prove more constructive in planting for more grains where there is more than enough bread for everyone to prosper.

In spite of religion, ethnicity, race……… an ALL OTHER EXCUSES!

They choose love over War.