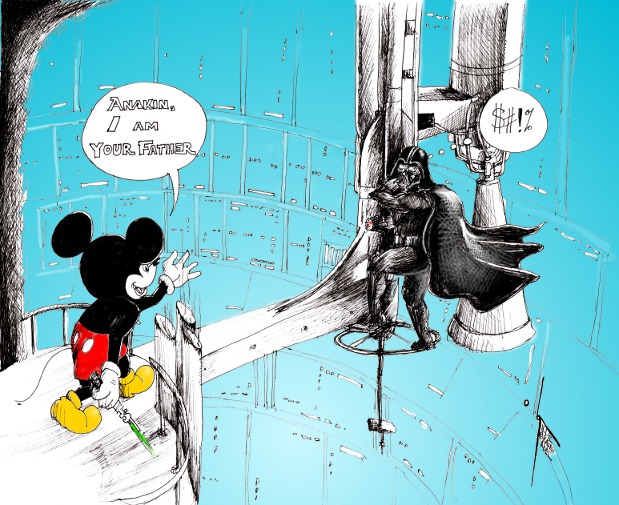 I read the news that  The Walt Disney Company made a major acquisition this week, purchasing Lucasfilm from George Lucas in a $4.05 billion deal.  I had to draw.

I have been and am a crazy Star Wars Fan and so are my children ( I suspect their children will be…. yes they will be!) But, after hearing this news I immediately felt uneasy. After a bit of venting and discussion with one of friends, and an  accomplished Artist, Ethan Diehl,  I had to draw a cartoon.  I credit a major chunk of this idea to our discussion.  Thanks Ethan!

I await a return to a Star Wars driven by magical story telling  and less dependent on technology to fill in the weakness in story telling.

Disney has been wonderful at story telling but until they prove their worth I will be keeping my cartoon front and center, on the gallery of my mind.

And I really hope  Darth Vader (Anakin’s Hologram) in the proposed Episode VII does not start singing and dancing!

May the force be with Mickey.