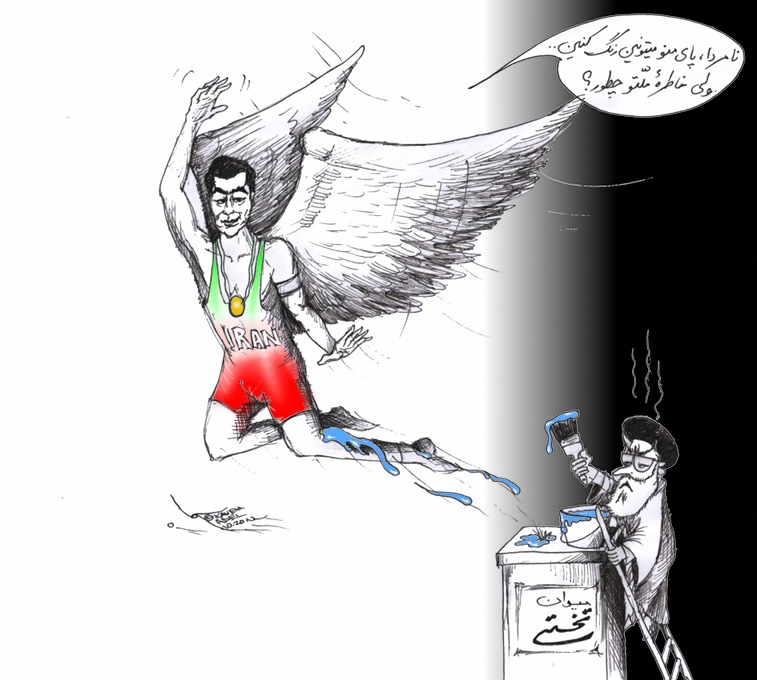 GholamReza Takhti (غلامرضا تختی) was a hero and continues to be an Iranian sports icon and political activist despite the fact that 44 years after his passing his name still carries integrity, class and compassion among young and old alike.. He was a gold Medal winner in Olympic Wrestling, humble man of the people specially those heavily hit by natural and economic disasters, speaker against injustice and corruption.

His life was cut short under mysteriously suspicious conditions in 1968.

Apparently, now his love and service to the nation and its people is easily painted over and forgotten. Recently, his statue where he is dressed in his wrestling suit, gold medal hanging from his neck and boots in a town square was painted blue. His legs were exposed and it was deemed un-Islamic by the authorities. Hence his legs were also painted blue.

In my Cartoon Takhti says (translated from Persian,) ” Cowards, You can paint my legs….. but What about people’s memory?”

To me Takhti always lives up to his nickname, Jahan Pahlavan (World Champion) epitomizing his JavanMardi (Chivalry and selflessness).

He is the conscience of the Iranian people.  No matter how it is painted over, he will always be there as a remainder of right and wrong.

*** I wanted to give credit to Towfigh magazine that published a cartoon on the front cover right after Takhti’s death where he is flying over the mourners saying, “Don’t cry for me, cry for your own plight.” where this information was cited from this Wikipedia link****