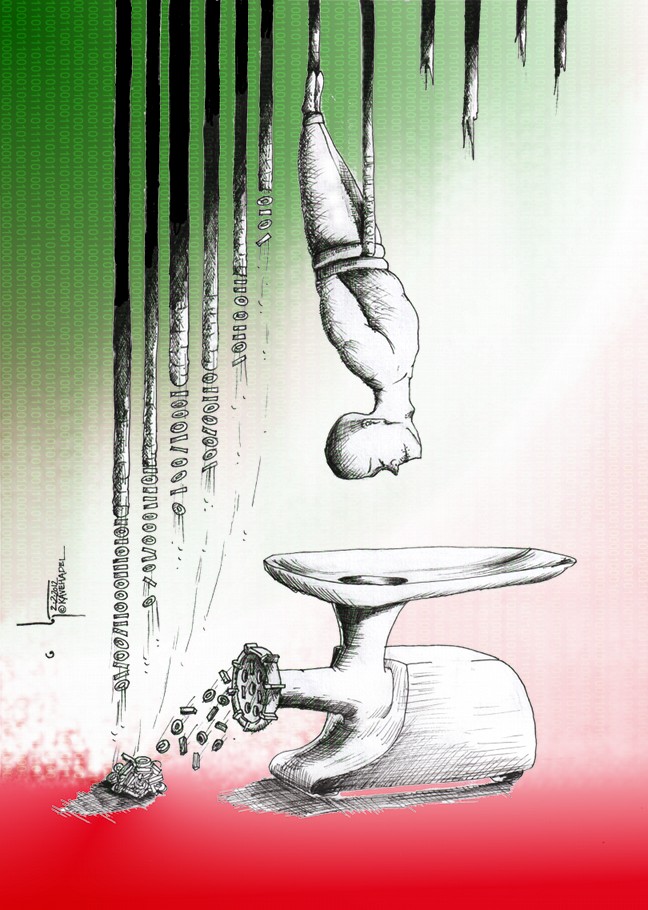 Political Cartoon “Zero and One ” (For Saeed Malekpour and others) by Cartoonist and Artist Kaveh Adel.

Internet, cyber freedom and freedom of expression do not exist in places where narrow-mindedness rules.

Each human life taken or put on death sentence in the name or as a pawn in  a political game is too many.

My thoughts are with Saeed Malekpour and all other prisoners of conscience.

The best weapon against tyranny is  persistence.  When a one is turned into a zero another One rises.

If one blogger is cut down, another must spring up. Zero to a One.

When an artist is imprisoned, ten more start to create. Zero to a Ten.

As a filmmaker’s creativity is put through a meat grinder,  hundreds more sprout to bring beauty back with their imagination. Zero to a hundred, to a thousand.

As one in a rally against injustice and greed is unjustly taken into custody, A million more flow into the streets. Zero to a Million.

What can I do?

Sit there and watch…. my shows, my movies, read my books, and just be happy with a momentary passage of another’s suffering with my own mind numbing bandaid?

I chose otherwise.  I mindfully choose to be proactive. To raise awareness. To use my power as a singular human being connected to thousands–millions more to be seen and heard. As a Zero was once a One and now it’s One’s turn to not be silent.

I touch and am touched by people.

What will you do?

See the Cartoon titled: “Zero and One ” (For Saeed Malekpour and others) on Facebook.